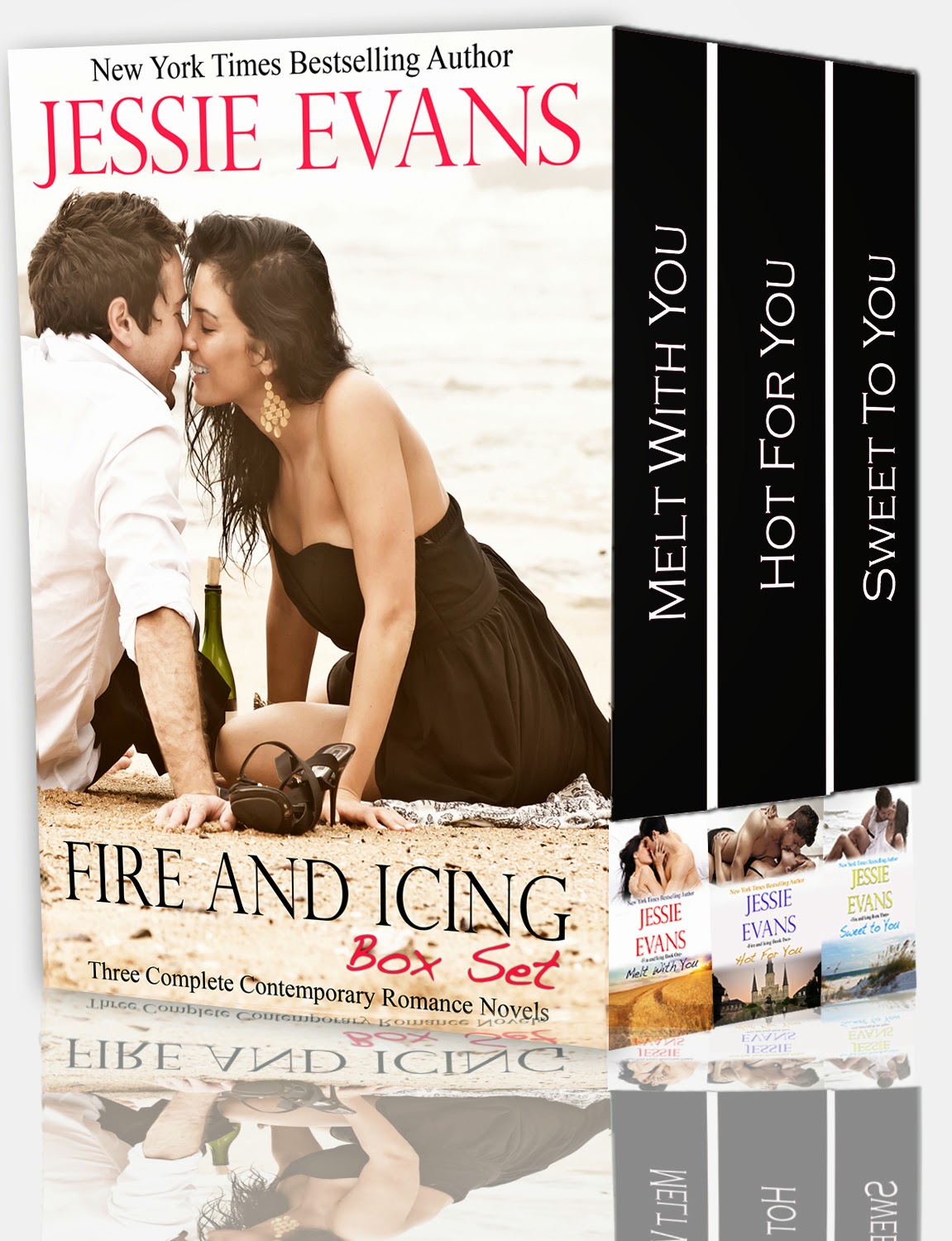 The Fire and Icing Trilogy Bundle is a box set of three sweet and sexy full-length novels by New York Times and USA Today Bestselling author Jessie Evans. Where there’s smoke there’s fire… MELT WITH YOU After ten years as America’s sweetest celebrity chef, Naomi Whitehouse is enjoying life out of the spotlight. Life is good until she runs into her high school sweetheart, a sexy firefighter who gives her a reception chilly enough to freeze a forest fire. But as the month passes, Jake and Naomi discover some fires never burn out. HOT FOR YOU Faith Miller has faith in two things—her surrogate firehouse family, and her own two hands—and she needs a man in her life like a fish needs a bicycle. But when Mick Whitehouse moves back to Summerville, Faith’s happy, single life is turned upside down. Soon, Faith must choose: let fear of repeating her mother’s mistakes send her running, or have faith in the man she’s come to love? SWEET TO YOU When s'mores and whiskey shots lead to skinny-dipping at a singles' camping retreat, Maddie Whitehouse knows she won't be able to resist another steamy encounter with the sexy firefighter her childhood friend, Jamison, has become...even if he is off limits. 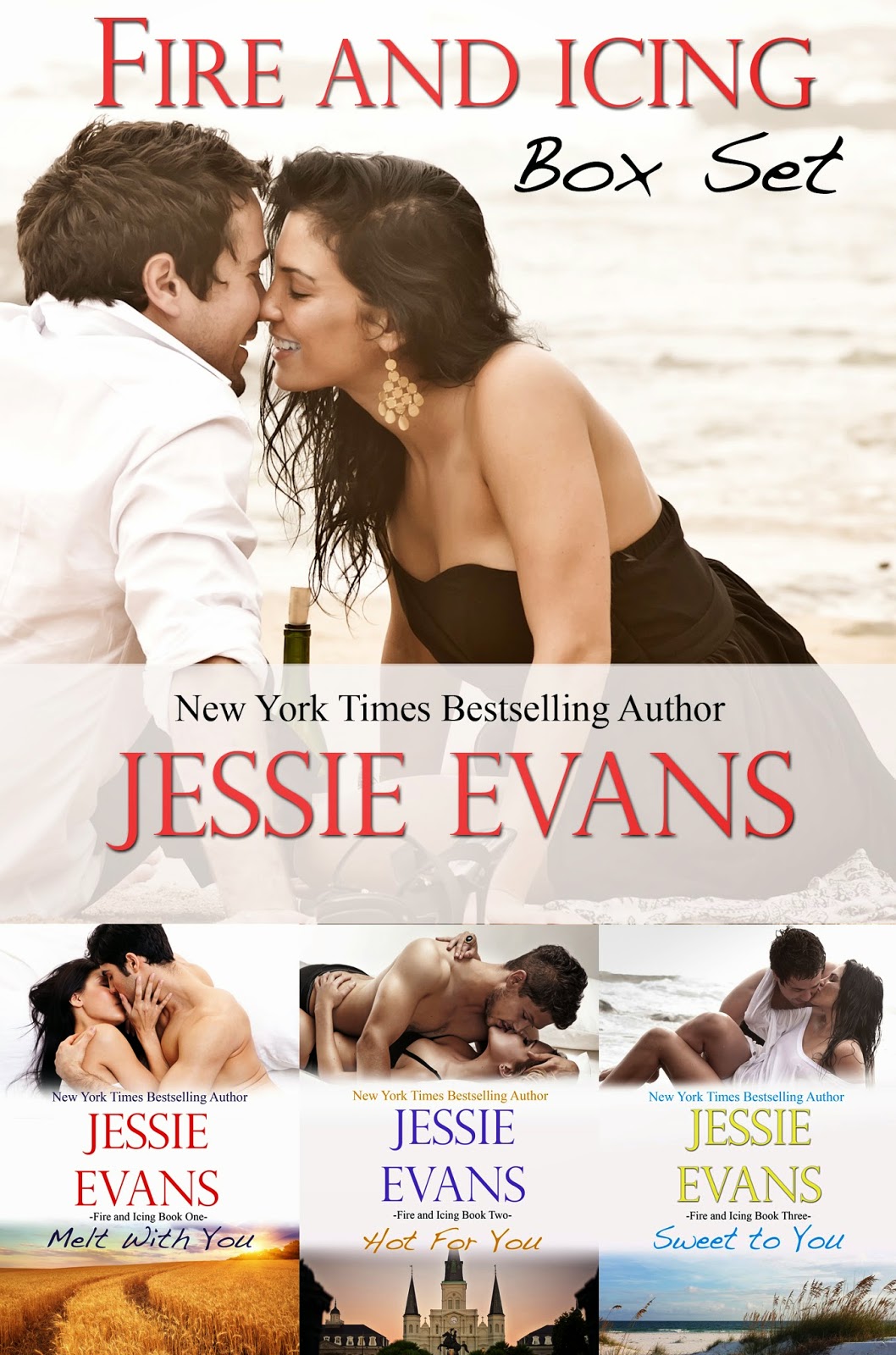 Excerpt One
MELT WITH YOU
Fire and Icing Book One
There, wearing nothing but black jeans and a black Summerville Fire Department baseball cap, was the man she’d come for. Naomi’s breath caught and a horrible, excited-but-miserable feeling filled her chest. It was same feeling that had overwhelmed her when Jake had turned and walked away from her at the store yesterday, but this time, he didn’t know she was watching. Naomi was able to let her eyes linger, taking in every inch of the stunning man her high school sweetheart had become.
Jake didn’t strut down the catwalk like his little brother; he owned the stage like the captain of a ship, like a Roman commander leading his army into battle. With his tanned, olive skin, broad shoulders, chiseled chest, and deliciously narrow hips, Jake was every bit the beefcake his little brother was. But that wasn’t what made the crowd suck in their breath in appreciation as he reached the end of the catwalk and took off his hat, his tousled brown hair flopping over one eye as he bowed to the ladies on either side of the stage.
No, it wasn’t his muscles, the strong planes of his face, or those dark brown eyes that glittered with intelligence that made it impossible for Naomi to take her eyes off of him. It was the way he held himself, the way he moved like a creature that was completely at home in its body. Jake was a man who walked, talked, and prowled the catwalk with innate confidence. He knew who he was and where he was going. He was a man who worked hard and loved harder, who believed in the value of a man’s word, and never gave a woman a second chance to make a bad impression.
He was never going to let her apologize, let alone forgive her. Jake wasn’t that kind of man. He only let down his guard for a select few. Once his trust was betrayed, an impenetrable wall went up and it was impossible to get through to him. She might as well try begging a block of ice to give her a second chance.
The only shot she had was to appeal to Jake’s sense of honor. If she purchased him fair and square, he would feel obligated to spend the next four Fridays by her side. He would be forced to remain in her presence long enough for her apologies to have a shot of slipping through his defenses.
And that’s why she thrust her auction card into the air—even though she was afraid, even though the logical part of her insisted that having Jamison in the picture meant her plan was doomed from the start.
But sitting there, seeing Jake dazzle the crowd with his smile, Naomi couldn’t resist. She had been dying to see that smile again, ever since the day she’d broken Jake’s heart and walked away from the only person who had ever made her feel completely loved.

Jessie Evans gave up a career as an international woman of mystery to write the sassy, Southern romances, and sexy, New Adult romances she loves to read.
She's married to the man of her dreams, and together they're raising a few adorable, mischievous children in a tree house in the boonies. She grew up in rural Arkansas, spending summers running wild, being chewed by chiggers, and now appreciates her home in a chigger-free part of the world even more. When she's not writing, Jessie enjoys playing her dulcimer (badly), sewing the worlds ugliest quilts to give to her friends, going for bike rides with her house full of boys, and wandering the woods, glass of wine and camera in hand, on the lookout for Bigfoot.

Giveaway
Jessie is giving away a $25 Amazon Gift Card
a Rafflecopter giveaway
Posted by Unknown at 6:00 AM