Sliding Into Second by Ella Jade

If you're into hot, dirty-talkin', sexy baseball heroes I may have just the thing to quench that thirst... 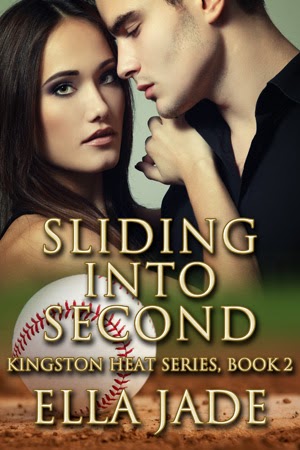 Have you met my players?

Available now for a limited release price of .99 cents...

Jilted once before, now it's her turn to level the playing field.

Hotshot sports reporter Sage Millan has been busy making a name for herself in the male dominated world of baseball. She's just landed her dream job, and her first assignment is covering the newly crowned World Series champions, The Kingston Crushers. This is the opportunity of a lifetime. The only problem…her ex-boyfriend, and the only man she's ever loved, is the team's second baseman. Things ended badly between them, and she's not sure she can put those demons to rest.

Professional baseball player Nicolas Cordova is having the time of his life. His team has just won the World Series, and with the victory comes more fame, women, and exposure than he ever could have imagined. But things are about to change for the sexy, charismatic athlete. He never expected his ex-girlfriend to walk back into his life, much less the locker room.

These days Sage is smarter, more mature, and doesn't plan on being played a second time. Her appearance stirs old memories for Nic. She's the one he let get away in the name of his career. He vows he can be the man she needs this time around. Will that be enough to mend her broken heart?

“I’ll admit I’ve had many women in the past, and I can’t apologize for living. But as the years went by, my feelings for you were always someplace deep in my heart. I know that’s why I can’t settle down. Why I can’t find the peace I’ve been searching for. It doesn’t exist without you.”
“How can you say things like that? You don’t even know the woman I’ve become. I’m not that girl who relied on you, the one who would’ve followed you anywhere. I’m not her anymore, Nic. I can’t ever be her again.”
“Maybe I’m not asking for her.” He leaned closer to her face. “Maybe I want to know the woman you are today. I want another shot at this.”
“No,” she whispered.
“If you remember anything about me, I have a hard time with that word.” He tipped her chin, focusing on her lips. “I am going to kiss you. Right here and right now.”
Her knees buckled as a cool tremor swept through her. She wanted to say no. It was the only logical word to mutter, but her heart didn’t want her to say it. Her body wasn’t on board with turning him down either. The warmth that built in her stomach had moved lower, and now all she could think about was his lips on hers.
“It doesn’t sound like you’re asking,” she breathed out.
“I’m not.”
Before she could say anything else, his mouth was on hers, eager, but slow and soft. His stubble grazed along her chin as he tilted his head and deepened their bond. The sound throughout the crowded lobby seemed to fade into the background, and soon, all she could hear was her heart pumping loud between her ears. Why did he have to be such a freakin’ good kisser?
After the incredibly long connection, he pulled away, but not before stopping to kiss the bottom corner of her mouth like he used to.
“I’ve waited a long time to do that,” he said. “It was worth every lonely minute.”
“I... Nic...” She’d always had the gift of words. It was what she did for a living, but in that moment, all of her thoughts were jumbled and senseless.
“It’s okay.” He grinned as he stroked her cheek. “Let’s get something to eat and maybe figure this out. Whatever this is.”
“No.” She ran her hands along his strong chest, resting them on his shoulders.
“Don’t over analyze this, baby.” He glanced down at her hands on his body. “Let’s just go with it.”
“That’s what I’m trying to tell you.” She took a breath and continued before she lost her nerve. “Take me upstairs to your room. I know how we can figure this out.”
“What are you asking?” He placed his hand on the small of her back, drawing her closer to him. “You need to be real clear.”
“I want to go upstairs with you.”
“That’s not why I kissed you.”
“Isn’t it?” She smirked. “We’re adults now, Nicky. Let’s settle this like adults.”
“I’m not looking to settle anything. That usually means it’s over, and we’re nowhere near over.” He motioned for Joe. “I’ll take care of the bar tab and then we’ll get dinner.”
“No.” She draped her arms around his neck, intoxicated by the idea of being so close to him again. He may be older now, and may have lost those boyish looks, but the man he had become suited him and drove her wild with need.
“What did I tell you about that word?”
“I can guarantee I won’t be using it once we’re in your bedroom.” She ran her tongue along her top lip. “I’m going to the ladies room. When I come out, if you’re not by the elevators waiting for me, I’ll know that kiss was nothing more than the heat of the moment and we can go on with our lives.”
“Sage?”
“Shh.” She pressed her lips to his. “Now who’s over analyzing?” She reached for her purse and coat hanging on the back of the stool. “I’ll see you in a few minutes.” I hope.

This is book 2 in the Kingston Heat Series but both books stand alone and can be read in either order.

WARNING... Pax will steal your heart 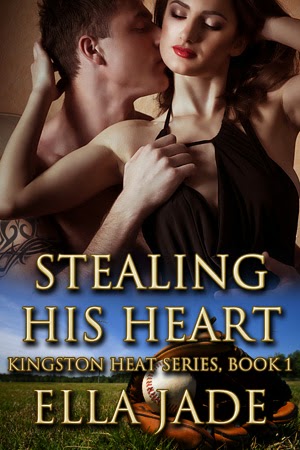 Will the bad-boy pitcher strike out when it comes to love?

Shy music teacher Sophia Ballis has sworn off men. After a bad experience with a college jock she decided it was better to be alone than to get burned again. She focused on her education and now her new job at a local private school.

Professional baseball pitcher Paxton Hughes is a player both on and off the field. He's signed to the Kingston Crushers to bring home the coveted championship title. Nothing can get in his way. Serious relationships don't mix with a life on the road and he never loses focus on the game. One-night stands are his specialty for a reason.

While out jogging one spring morning, the two collide, setting their course in motion. Pax is immediately drawn to the unassuming beauty. Sophia is aware of his reputation and decides one night of meaningless sex with the attractive Texas charmer is just what she needs to get over her self-imposed dry spell. Pax has more than a one-night stand on his mind, but will his bad-boy persona and demanding schedule ruin any chances of a happily ever after?

REVIEWS:
"Ella Jade always comes through with sexy little romps that are always entertaining" Manic Readers
"I read it in one sitting. I couldn't put it down. It has everything I LOVE in a sexy steamy hot book." My Daily Romance
"Very fun read." Musings From An Addicted Reader
"This is a story that you won't regret getting into." Adri at Sassy Moms Say Read Romance

Ella Jade has been writing for as long as she can remember. As a child, she often had a notebook and pen with her, and now as an adult, the laptop is never far. The plots and dialogue have always played out in her head, but she never knew what to do with them. That all changed when she discovered the eBook industry. She started penning novels at a rapid pace and now she can't be stopped.

Ella resides in New Jersey with her husband and two boys. When she's not chasing after her kids, she's busy creating sexy, domineering men and the strong women who know how to challenge them in and out of the bedroom.  She hopes you'll get lost in her words.

She loves connecting with readers. You can find her here…

ENTER FOR A CHANCE TO WIN A $20 AMAZON GIFT CARD

a Rafflecopter giveaway
Posted by Unknown at 5:00 AM