Breaking Ties and Trail of Crosses by Jo Grafford 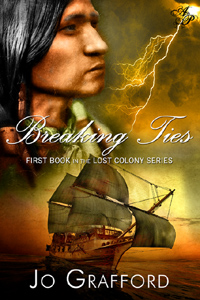 Intelligent and well ahead of her times, ROSE PAYNE'S world is shattered after a secret betrothal to the duke’s son costs her job as a clerk in his father's household. Without a letter of recommendation, she becomes an easy target for recruiters to the Colonies. Desperate for work, she signs up for a risky overseas venture and sails for the New World, vowing never again fall for a wealthy gentleman. Returning from a diplomatic tour in London, CHIEF MANTEO is bewitched by the elusive, fiery- haired ship clerk and determined to overcome her distrust. He contrives a daring plan to win her heart – a plan he prays will protect her from a chilling conspiracy involving murder, blood money, and a betrayal of their fledgling colony so terrifying it can only be revealed in BREAKING TIES. BREAKING TIES is the never-before-told rest of the story of the Lost Colonist of Roanoke Island. 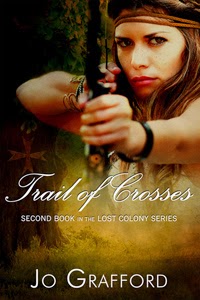 Jane Mannering can shoot a rifle and handle a knife as well as any Englishman. However, she is no match for the red-painted warriors who ambush her section of a Colonial caravan the moment she and her comrades reach the shores of Virginia. Jane plots their escape during a forced march inland, leaving a trail of maltese crosses carved on the trees – their pre-agreed upon signal of distress. All the while, she fumes over what interest their captors could possibly have in a twenty-three- year-old spinster and a rugged band of brick masons, sawyers, and farmers. When the ruthless Chief Wanchese intercepts them at the crossroads of the Great Trading Path, Jane is shaken to discover their greatest enemy plans to keep her for himself. It’s a pity he’s the only man on two continents who’s ever stirred her heart. Alas, she has an entire colony to save, and capturing his attentions is not part of their escape plan. 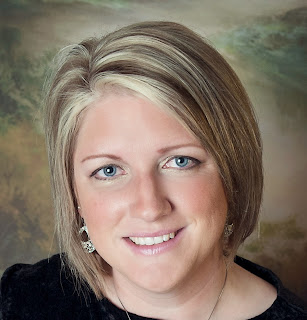 From St. Louis, Missouri, Jo moves a lot with her soldier husband. She has lived in the Midwest, the deep South, and now resides in Bavaria. Jo holds an M.B.A. and has served as a banker, college finance instructor, and high school business teacher. She is a member of Romance Writers of America, From the Heart Romance Writers RWA Chapter, and the Writers Group of Ansbach/Katterbach/Illesheim.


Connect with the Author